FOOD DONATION: It’s a good thing, and it’s a green thing, too

I recall working in Vancouver in the ’90s, where our caterer occasionally gave the leftovers to local homeless people in the area. But how often have we thought about this on a larger scale? Are we really aware of the scope of how many people in America go hungry each and every day? And what can producers do about it? END_OF_DOCUMENT_TOKEN_TO_BE_REPLACED Governments, industries and corporations have made strides to integrate sustainability into their policies and operations. Recent examples are the mandatory transparency by the European Union and Singapore Stock Exchange and declarations by corporate leaders at the UN Global Climate Summit in New York to reduce their carbon footprints. END_OF_DOCUMENT_TOKEN_TO_BE_REPLACED 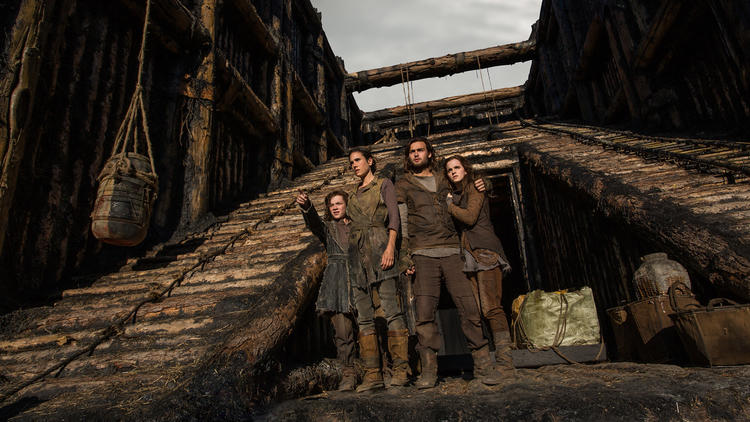 END_OF_DOCUMENT_TOKEN_TO_BE_REPLACED

The myth that it costs more to “go green” on set is currently plaguing the production of film and television. Sustainable filmmaking efforts are making significant strides and continuing to evolve. When resistance by decision-makers occurs, however, it is often due to complaints over cost. END_OF_DOCUMENT_TOKEN_TO_BE_REPLACED

Since Spring 2013, student films at the Hamburg Media School have been produced sustainably. The students plan their productions according to the criteria that are required to receive Green Shooting Card certification, which is issued by the Film Förderung Hamburg Schleswig-Holstein (FFHSH).

“From the very beginning, it was clear that we would have to take this initiative to the film schools”, explains Christiane Scholz, a representative of Hamburg Film Commission who has just sealed a cooperation agreement with Professor Richard Reitinger, Head of Film Studies at the Hamburg Media School. “It was very much a case of preaching to the converted with students and teachers alike.” END_OF_DOCUMENT_TOKEN_TO_BE_REPLACED

Studio Hamburg FilmProduktion is aiming to increase the number of sustainably produced TV series. Now that Großstadtrevier has been awarded the Filmförderung Hamburg Schleswig-Holstein (FFHSH) Green Shooting Card, their series Notruf Hafenkante is also in line to adopt green standards.

“A lot can be achieved, especially with a TV series, by the careful use of resources and energy efficiency”, explains Michael Lehmann, Chairman of Executive Management at Studio Hamburg Production Group. “Großstadtrevier is the first Studio Hamburg production to issue such a statement.
The Green Shooting Card recognizes and awards these achievements.”

END_OF_DOCUMENT_TOKEN_TO_BE_REPLACED

Situated in a broad strip of woodland just outside Munich, the Bavaria Film Studios has revolutionized its energy policy.

The heating system works sustainably with geothermal energy and electricity which is generated by hydropower. Not only has the studio’s infrastructure become carbonneutral, but productions being made in the studio complex are adopting the concept as well.

END_OF_DOCUMENT_TOKEN_TO_BE_REPLACED

ECOCINEMA, the Dutch initiative is going global
By Birgit Heidsiek

With Solar Cinema, Dutch filmmaker Maureen Prins has launched an international project that combines the best of film culture and sustainability. She is bringing her solar powered screening system to areas in Europe where movie theaters no longer exist or where independent films cannot be seen. END_OF_DOCUMENT_TOKEN_TO_BE_REPLACED

“Green film production is an issue that we are already discussing at Berlinale Talents since several years”, says Matthtijs Wouter Knol, Project Manager Berlinale Talents. “Michael Geidel from the Green Film Initiative in Potsdam, an expert for sustainability, is a recurrent guest speaker. At our ‘Meet the expert’ workshop, he will discuss the practice of green according to the principle of ‘Reduce, reuse, recycle.’” END_OF_DOCUMENT_TOKEN_TO_BE_REPLACED

The Berlin International Film Festival is partnering with the Forest Carbon Group a consulting group providing specialized services to climate-friendly companies and sustainable product strategies – which is calculating the carbon footprint for this year’s festival.

Unavoidable carbon emissions are being compensated by investment in a forest protection project in the Congo. This is being done to insure that a huge forest area, the size of 300,000 soccer fields, will be protected from deforestation. END_OF_DOCUMENT_TOKEN_TO_BE_REPLACED